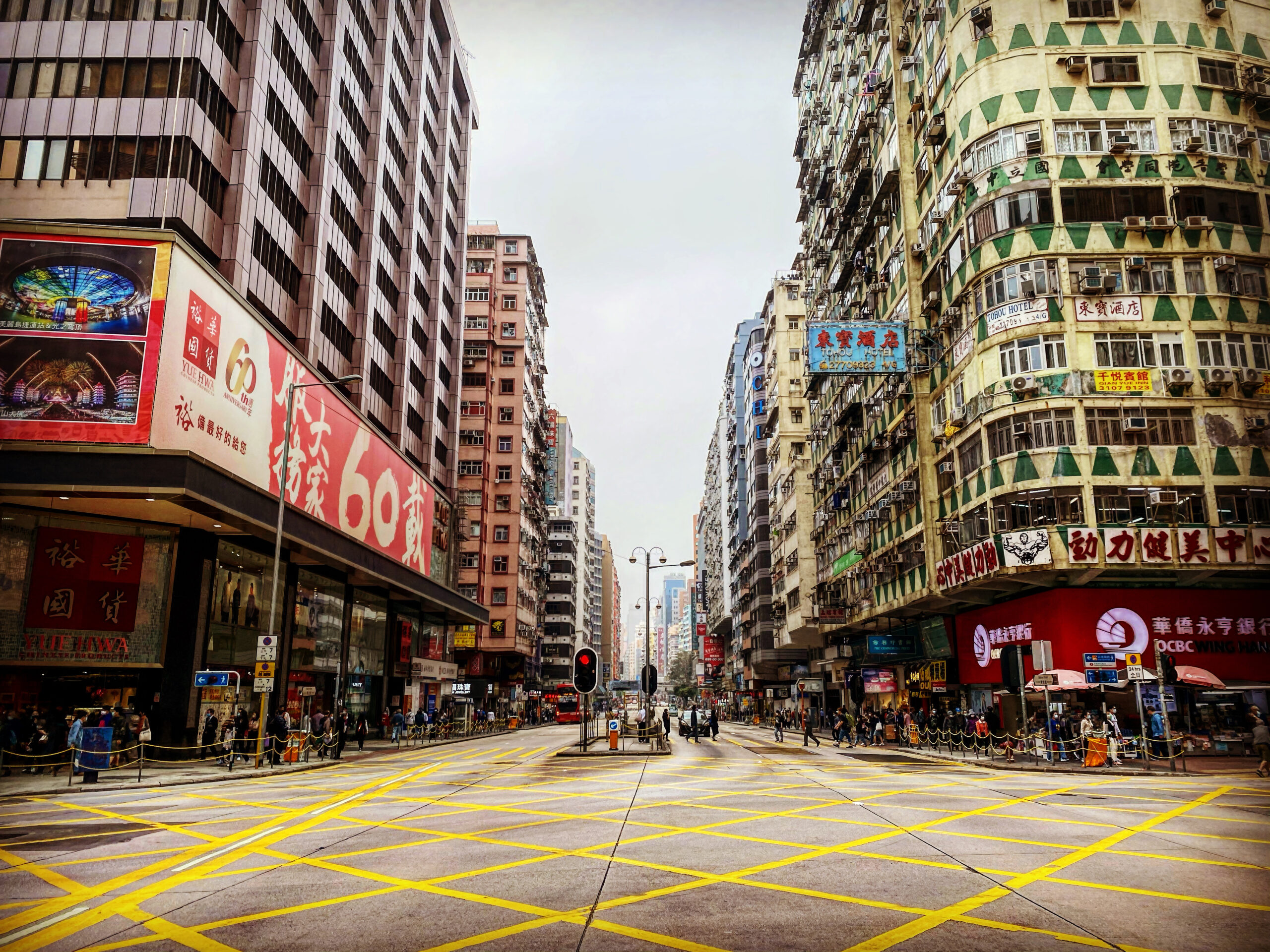 Despite a strong start in keeping coronavirus cases low, Hong Kong is starting to feel the pressure as increasing cases of the coronavirus continue to rise.

Since January, Hong Kong has strictly taken precautions to contain the spread of the coronavirus, with the virus originating only a four-hour train ride away in Wuhan, China. Despite the Hong Kong Government resisting stern pressure to close all of its borders back in February, a handful remained open, angering locals.

As locals were worried positive cases would come from Mainland China, it wasn’t until March when the number of infections would surge. As the coronavirus swept the globe, countries worldwide decided to close borders. Europe and the United States have been the worse affected, prompting for Hong Kong residents to quickly return from overseas back into the SAR.

Increasing cases of COVID19 push hospitals to their limits

Experts in Hong Kong previously warned of a wave of new infections due to the returning residents. This has proved correct, as the number of confirmed cases now stands nearly at 900, contrary to only 100 by March 2nd, just over one month ago.

At the time of writing, there are still only 4 deaths. But hospitals are struggling to cope.

“There are 30 to 40 newly-infected cases per day, which is steady. Our isolation beds are nearly used up and we need new PPE equipment from the government. We are focusing on the coronavirus so there will be no more strikes, but we still want the border completely closed,” Chris Cheung Treasurer of the Hospital Authority Employees Alliance told me. 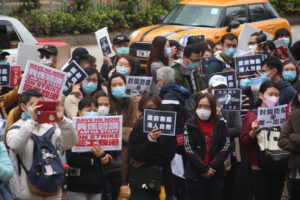 The Hong Kong Government has attempted to prevent the spread of the virus by enacting some recent new laws. As of the 19th March, people entering Hong Kong from overseas must undergo home-quarantine for 14-days.

On the 24th March Chief Executive Carrie Lam banned all non-residents from entering the city for two weeks, but some borders with Mainland China continue to be open.

More recently, in an attempt to further push social-distancing, as of April 3rd, under emergency powers, premises are prohibited to sell or supply of alcohol for two weeks. It is thought to prompt the closure of around 1,200 pubs and bars in the city. 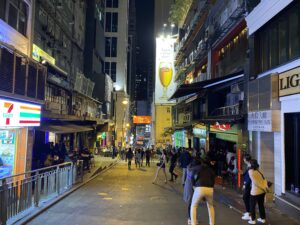 For those entering Hong Kong from high-risk countries can quarantine at home or in a hotel. Many of which have chosen to stay in the struggling hotels of the city.

Several hotels have voluntarily announced their availability and offered ‘Quarantine packages’ to those re-entering the city, whilst substantially slashing their normal rates. 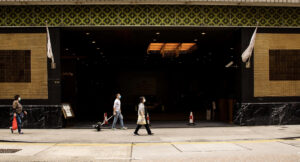 The Centre for Health Protection stated the Hong Kong Tourism Board has a designated list of hotels working with the government offering quarantine stays. However, it has been discovered many more hotels are allowing guests to stay under quarantine circumstances, and are not on that list.

Not all hotels are taking the same different approach. With the potential risk to hotel staff and current guests, there are hotels that are standing firm and rejecting quarantined guests.

“Guests have to fill in a form at the airport and say which hotel they will stay in. We get a call from the government a day after. If the guest is in our hotel and wants to quarantine, we ask them to leave,” according to a sales official, at a major chain hotel.

It’s not just hotels; alternative types of guest accommodations are struggling to deal with the impact of the coronavirus. Hosts via Airbnb are concerned at allowing visitors with travel and some have even inflated prices, to starve off interested customers whilst hostels have struggled for months, with several closures.

Urban Pack, the city’s most popular hostel, has had to survive on government financial relief. But despite the economic struggle to attract guests, they’ve insisted they are not accepting quarantine guests or anyone with recent travel.

“We’ve had to close several of our units. But we are not accepting quarantined guests” the hostel managers confirmed. 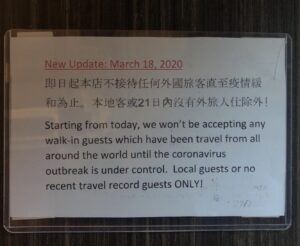 Arrivals at a record low

Tourism has been appalling since the social unrest swept the former British colony since June 2019. Tourist arrivals dropped significantly during the height of the unrest between protesters and police, but evidently the coronavirus spread has had an even greater effect. 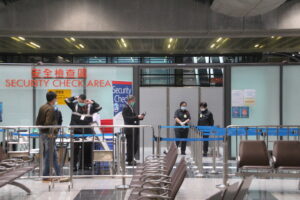 Year-on-year, February saw a 96% decrease in arrivals. There were only 199,123 arrivals compared to over 5.5million in 2019,  according to the Hong Kong Tourism Board. Now that non-residents are banned from entering the SAR, tourism is non-existent, whilst March’s arrivals are expected to be even lower.

Since the end of January, Hong Kong has had to cope with the coronavirus as it broke out across Mainland China and into the city. Locals quickly took immediate safety precautions by stocking up on masks and staying home, with the reminder of the SARs virus in 2003, all too recent. Added to the growing free-fall of tourism, the streets of Hong Kong have been deserted, by its own standards, for most of 2020.

Schools also continue to be closed whilst bars, restaurants and hotels are desperately quiet. Supermarkets continue to be busy as people stock up on food, whilst the food delivery service is thriving. People still are queuing up for discounted sales on surgical masks, whilst taxis scour the streets in a desperate search for more customers. 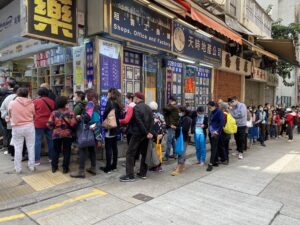 People with the ability to work from home are still doing so, but for the locals who work for themselves such as cardboard collectors, vendors and market traders, life continues.

Although the city isn’t on a complete lockdown yet, life in Hong Kong doesn’t resemble the chaotic over-crowded day-to-day life it normally provides. 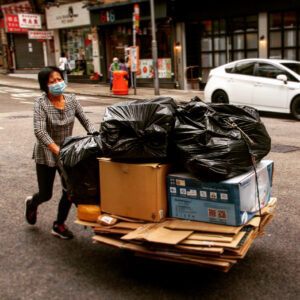 The Hong Kong protests and social unrest have quietened down since November 2019, at least in mass and regularity, but that hasn’t stopped gatherings and sporadic clashes each month.

Furthermore, despite the calls for regular social distancing, clashes have taken place in an unexpected fashion.

On February 29th in Mongkok – said to be one of the most congested places in the world – saw the biggest clashes between protesters and police since the coronavirus outbreak. Road barricades and tear gas were exchanged, and according to the Hong Kong Police, 115 were arrested. 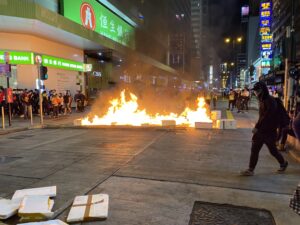 A barricade is set ablaze on Nathan Road, Mongkok during the clashes between protesters and police.
29th February 2020.

Similar clashes have occurred on an even smaller scale, most recently in Yuen Long on March 21st, with further arrests and exchange of projectiles between protesters and police. It seems apparent that demonstrations are at the moment more likely to happen if an anniversary event is organised. These events have taken place usually monthly, such as the Yuen Long attacks on July 21st 2019 and the Prince Edward controversy on August 31st 2019.

With the world now focusing on the effects of the coronavirus is drastically having on the United States and within Europe, Hong Kong is still in a huge crisis. With numbers of infections increasing seven times in one month – albeit largely due to imported cases – the city has yet to reach its peak of infections. 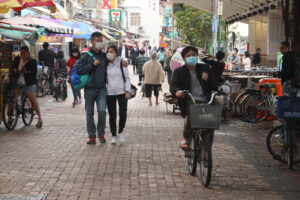 As reports in Mainland China state, local infections are lowering, it does offer a light at the end of the tunnel for Hong Kongers who are just next-door. But with the back-end of the coronavirus seemingly some way off, the city must stay vigilant. Complications will be added when the one-year anniversary of the protests in arrives in June, undoubtedly causing further demonstrations. The Government LegCo elections in September then add to the Hong Kong’s woes, meaning the problems for the city still remain firmly ahead.