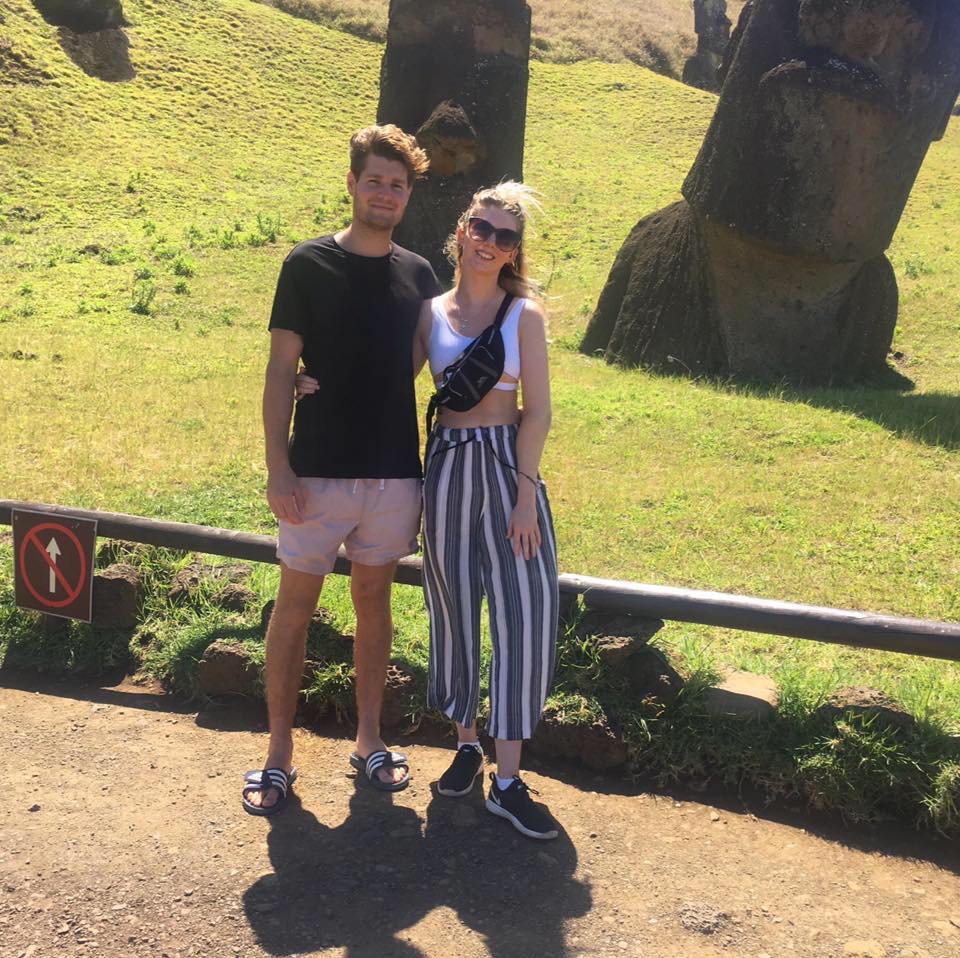 Posted at 13:44h in Latin America by tommy
0 Likes

Two British backpackers who saw an abrupt end to their dream trip have managed to get on an evacuation flight from Bolivia and arrive home in the UK.

Harry Guy-Walters (23) from Bishop Stortford and Molly Holmes (23) from Kings Lynn were stranded in Bolivia, waiting desperately for the UK government to arrange an evacuation flight home.

Bolivia recently closed its borders and cancelled all international flights. The country has begun mandatory 14-day quarantine whilst the presidential elections have been postponed, initially scheduled for May.

There are currently 123 confirmed cases of the coronavirus in Bolivia, with 8 deaths.

The couple, who met in Nottingham University, were 7 months into a 12-month trip but found themselves in lockdown in the Bolivian capital, La Paz, the highest elevated capital city in the world.

They were allowed to leave their Airbnb accommodation between 8 am-12 pm, one at a time, to get food. Gun-carrying police are seen on street corners, to enforce the city’s lockdown. 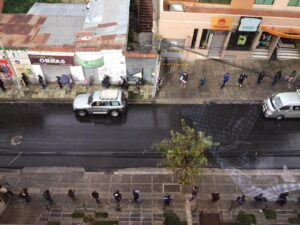 “Initially we thought the borders were open on the 31st March but were being told it was going to be the 5th April at least,” Molly told me.

In the past weeks, the backpackers spent around £6,000 in attempts at arranging flights, hotels and further travel to try and get home to the UK.

How they got stranded

“We started a 3-day tour to the Uyuni Salt Flats but 8 hours in the driver announced the Chilean border was closing, and two people as part of the group needed to get there before it closed,” Harry added.

This turned into a major detour for the pair, including a 3 am wake up call, then went 14 hours to the Chilean border, followed by another 17 hours through the night back to Uyuni, according to Molly’s Facebook post.

Losing two days of their tour and with no refund, they both hopped on a bus to the capital La Paz, hoping for a flight back to the UK.

“The fear of being stranded was the main reason,” Harry admitted.

“Our insurance wasn’t going to cover us unless we leave now since WHO (World Health Organisation) had declared the coronavirus a global pandemic,” Molly added.

Harry had attempted to seek travel guidance from the British embassy in London but was often given little help.

With them having little Internet access their parents booked them both on a flight the next day out of La Paz. Travelling back, further complications ensued. Unbeknown to them, Bolivia had imposed a curfew. This meant passenger night buses weren’t allowed to operate, leading to the driver asking them to hide on the floor in the dark whispering ‘policia curfew’ as they passed military checkpoints.

Finally reaching El Alto International Airport, their flight had been booked incorrectly, leaving from La Paz in Mexico. Abnormally calm, they flew to the Bolivian city Santa Cruz, having been told there were international flights still available from there.

As they reached the airport, they were then told all international flights were cancelled. Now in desperation, they decided to take an 8-hour taxi – costing approximately £250 – to the Brazil border with the hope of getting a flight out of there.

The road trip included breaking the nationwide curfew, torrential floods, a burst tyre, and a police interception whilst the driver was seen taking cocaine. They had a flight booked the next day.

At the Brazil border

Finally reaching the Bolivia-Brazil border, tired and with lack of sleep for days, they had to wait until 8 am.

“By this point, we hadn’t slept for 5 days. We just lay down at the border, covered in mosquitos,” Molly said.

But despite their best efforts, Brazil had begun to restrict its borders and refused to let them in. After further attempts dialogue, things only got worse.

“The atmosphere just absolutely changed, the guards put their fingers on the triggers of their guns and lifted them right at us. They were definitely going to be shooting if we walked forward,” Molly said. 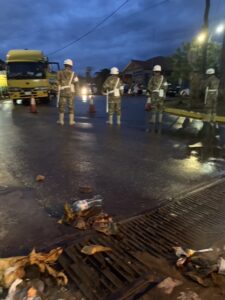 Guards at the Brazil-Bolivia border (provided).

The couple were told they would be quarantined at the Bolivian border if they didn’t leave, so the couple reluctantly took the bus back to Santa Cruz, and another flight to La Paz, where they currently are now.

At the time, Harry admitted they were treading with caution.

“We’ve exhausted most of our financials. But we’re in a good area. We are worried about the riots at night. Once it hits 7 pm, all you can hear is bangs and crashes. But as a whole, at the moment, we’re pretty safe where we are,” he said. 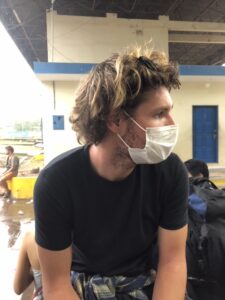 As he finished his sentence, there was an explosion heard outside.

“Maybe, it’s fireworks”, he joked. Harry works for Mark One Scaffolding, and turned 23 on the day we spoke, admitting he won’t forget this birthday in a hurry.

“I’ll be telling my grandkids about when I turned 23,” he later added.

Back in the UK

Molly and Harry both have family currently in self-isolation back in the UK, as they showed coronavirus symptoms. But both are concerned about those in the UK not taking precautions.

“I’m hoping if people back home can hear our story they can start taking things more seriously,” the couple stressed.

On the flight, the staff were wearing masks and handing out sanitizer. As they landed in Heathrow, Harry informed me no-one was wearing masks as they disembarked.