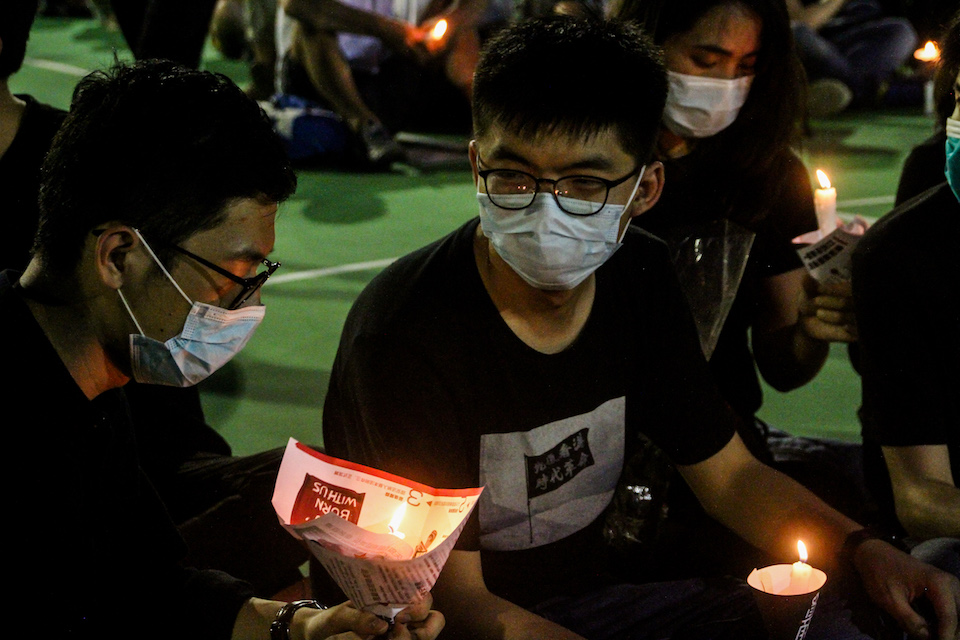 Posted at 11:08h in Articles, Interviews by tommy
1 Like

This June 4th marked 31 years since the Tiananmen Square crackdown in Beijing. Every year, Hongkongers mark this occasion in remembrance, holding a vigil attracting tens of thousands of people at Causeway Bay’s Victoria Park. Lit candles and mobile phones are held up high, whilst songs and chants are also practised.

But in 2020, it was the first year Hong Kong authorities had banned the annual vigil, citing safety and health concerns over COVID19. Social distancing measures are still in place in the former British colony, with a maximum of eight people per group allowed to gather. 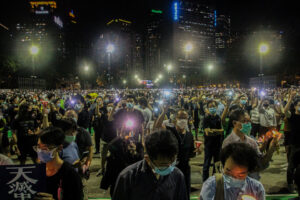 Thousands gather at Victoria Park, Causeway Bay to mark their respect for the 1989 Tiananmen Square crackdown.

On the ground at Victoria Park included several pro-democracy politicians and activists, such as the most well-known, Demosisto leader, Joshua Wong. Sat with his fellow activists, I had the quick chance to approach Wong, leading with Britains recent announcement of potential BNO (British National Overseas) changes for Hong Kong residents.

In case you didn’t know, the UK has pledged to change immigration laws for Hongkongers who are eligible for a BNO (born prior to the 1997 handover of Hong Kong back to China). This is because Beijing has controversially announced a new ‘national security law’ in Hong Kong, which essentially gives them the power to bypass local laws. This goes against the ‘one country two systems’ agreement Hong Kong is supposed to have until 2047. Furthermore, Britain’s pledge will allow BNO holders a better chance for a route to citizenship, extending their allowance of stay within the UK, without a visa.

Currently, 350,000 Hong Kong residents hold a BNO, with a further 2.6 million eligible, out of the 7.5 million population. 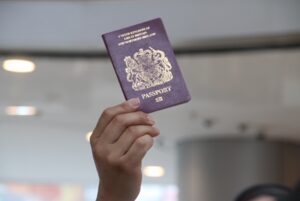 Britain as opened the door for some residents in Hong Kong to extend their stay under the BNO. Photo taken in Central, Hong Kong, 29th May 2020.

Joshua Wong had his say on the BNO situation when I asked him, and further issues between the UK and China.

“We welcome the idea of Boris Johnson but apart from providing a lifeboat for Hongkongers, (it’s) more important (for the UK) to put pressure on Beijing with necessary sanctions and restrictions, such as reducing the involvement of Huawei as a state-directed enterprise to enter the UK,” he replied.

As Wong went back to his primary focus, I pushed him for further comments on the BNO. I asked him whether it’s still a positive step for Hongkongers to have an alternative option, whilst asking if Britain should provide this for the entire population, rather than those just been born pre-1997,

“In the short term, the most critical is to urge Beijing to stop the implementation of the evil-law (National Security Law). That is the highest priority for us,” he added.

Clearly Wong was keen to look at the bigger picture internally for Hong Kong, rather than discuss escaping it. 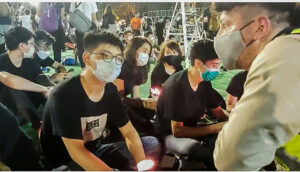 With the national security bill already approved and set to pass before the summer has ended, it’s been labelled as ‘the end of Hong Kong’ and ‘Hong Kong’s dark days’ by pro-democracy politicians and lawmakers.

In case you didn’t know, another controversial law has already become law. It’s now illegal to insult China’s national anthem, and is now punishable to up to 3 years in jail. That was passed on 4th June, the same day as the vigil.

Yet once the national security law is in place, cracking down on dissent towards the Central Government in Beijing, Hong Kong will not be the city we have come to love.

And unless there is a dramatic change in Beijing’s decision or the bill is postponed, Hong Kong is going to move ever closer to being another mainland Chinese city, under further authoritarian control with even fewer freedoms.

I hope it doesn’t come to this, and I hope that Hong Kong can survive as its current self. But being brutally honest, if not already, some Hongkongers will be looking elsewhere to reside for their futures.

From a British perspective, I personally believe an influx of Hong Kong citizens would hugely benefit Britain.

We all know China is on everyone’s doorstep, and sooner or later communications with them will have to improve worldwide.  Perhaps with more Hongkongers in Britain, there can be a bigger focus on teaching Cantonese or Mandarin languages? There are plenty of English teachers in the world, but we need more Mandarin speakers given the outlook of a more ‘Chinese’ future. The finance and banking sector in Hong Kong is strong, and so is London, so there are opportunities there, too.

Furthermore, Hongkongers can integrate into British society well. Many speak English, are highly educated and most seek a democracy to live within. Britain would be lucky to have its very own Hong Kong within its borders.